Meet Richard Joseph, the Haitian man who is being recognized as a true hero after he saves a Chilien woman’s life. Joseph was passing through the area just to meet friends when he came across a rather unusual scene. A woman hung on the 9th floor of a building was about to throw herself down to end her life. Instinctively, the young Haitian took his cell phone to film the incident, then under the desperate cries of the neighbors inviting the lady not to commit the irreparable gesture, he quickly changed to reflect on how to bring his help to the unfortunate Chilean.

“I decided to try to cushion the shock for her. I did not think I was going to save her, but I found it logical that if her fall is dampened before the impact on the ground, there is a possibility that she will stay alive, “he told reporters. Chileans, amazed by his feet.

Joseph quickly calculated the exact position to avoid the tragedy and, without thinking of the risks, he extended his arms to receive the lady. “I focused because I knew it was heavy, and when I received it in my arms, the force of the fall completely bent my body. We both fell to the ground, “says Richard Joseph.

At first, he thought of the worst because “she had trouble breathing and blood came out of her mouth,” after a few minutes she came back to her. Later, the Carabiniers arrived at the scene, evacuated the people from the area and took the woman away.

The victim was transferred to the San José hospital by Samu’s staff. Richard, meanwhile, suffered an injury to his knee, and walks with an orthopedic boot, but says he is happy to have saved a life 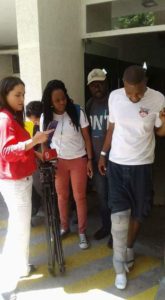 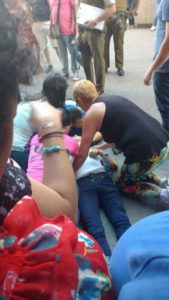 May 26, 2022 WKJA Staff NEWS Comments Off on South Florida Haitian Woman wakes up to a complete stranger trying to cuddle with her

CREEPY! Something you probably have only seen in a movie happened to this Miami Beach woman who says she wakes up to complete stranger next to her. The Haitian woman, Diana Pierre, of South Beach […]

February 25, 2021 WKJA Staff NEWS Comments Off on Haitian prisoner ESCAPES PRISON . . . but HE FORGETS where he lives . . . so he BEGS for GPS

SCROLL DOWN FOR VIDEOS Today in Haiti, in a town called Quoix-Des-Bouquets, a prisoner found himself freed during a prison break that occurred earlier today. The injured prisoner spotted walking down a street near the […]